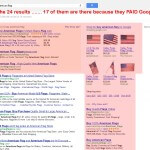 Many of you shop online…. Most of you have used the super helpful Google shopping results in your regular searches when buying things online. They are helpful, you get a picture and to compare prices BEFORE even visiting the website.

Until recently these results have been free for merchants who follow the rules to send their products in for product search. So you can get good results from websites who are providing Google honest data about their products such as UPC numbers, prices, shipping, taxes etc.

Google recently announced that by the end of summer these results, will no longer be the quality merchants you have come to see here, but rather only merchants to PAY GOOGLE to be there.

So Google used the backs of merchants to build YOUR TRUST in their shopping results only to “beef” up their value to turn around and SELL THEM to merchants. They built a product with your trust only to turn and sell it off to the highest bidder…..

“Since it is very difficult even for experts to evaluate search engines, search engine bias is particularly insidious.”
—Google Founders Sergey Brin and Larry Page

I have been telling everyone that Google screwed us since they took the once free and mostly fair Google Shopping and went paid with it…. Now enter Bing who intends to expose this “evil” act and turn the shoppers who Google has screwed. While I am not a Microsoft fan, I have to say “Go Bing”! They even launched a website for this campaign…

In the beginning, Google preached, “Don’t be evil“—but that changed on May 31, 2012. That’s when Google Shopping announced a new initiative. Simply put, all of their shopping results are now paid ads.

In their under-the-radar announcement, Google admits they’ve now built “a purely commercial model” that delivers listings ranked by “bid price.” Google Shopping is nothing more than a list of targeted ads that unsuspecting customers assume are search results. They call these “Product Listing Ads” a “truly great search.”

To make the campaign more complete, Bing has created a video… It’s pretty good too!

I have to give Microsoft some credit here, this is an excellent campaign to taint the godlike Google reputation and help to raise Bing’s following with honest truths. While this may be mud slinging reminiscent of a political campaign, the mud is real!

Then (2004)
Founders IPO Letter: “we do not accept payment for [search results] or for inclusion or more frequent updating.”

Google’s 2004 SEC Filing: “Our search results will be objective and we will not accept payment for inclusion or ranking in them.”

Google Commerce announces shopping results will be paid for and exclude merchants who don’t participate.

I think an awareness is important here. I also think Google has too much power to put small business’ out of business. I genuinely believe that Google has built a monopoly in which people, the very Americans they claim to serve, are in grave financial danger and are being spoon fed dishonesty. To further strengthen my position did you know that Google avoided paying $2 billion in taxes last year by moving money to Bermuda?

Bermuda is just such a shelter, and according to Bloomberg, Google moved $9.8 billion there in 2011 to avoid paying $2 billion worth of taxes. They continue by saying $9.8 billion was roughly “80 percent of Google’s total pretax profit in 2011.”

At a Senate antitrust committee hearing in September, Google Chairman Eric Schmidt acknowledged that Google’s market share is “within that area” of being monopolistic, though he said he’d prefer to “let the judges … actually do such a finding.”

“they too have the right to run their business as they see fit.”

However, while I agree their monopoly is less than illegal, I stand by my original platform that Google intentionally did a “bait and switch” which has brought harm, in loss of income for millions of small businesses and tricked consumers in to thinking the shopping results are honest… when they are going off to the highest bidder. Both merchants and shoppers alike we “baited” in to Google Shopping for more than a year, then when the “buzz” and participation was at its peak, Google switched the platform to paid for the merchants and now delivers shopping results to the shoppers which are NO LONGER based on relevance, quality, nor anything else consider organic. Worst of all Google’s required notation that these are sponsored ads is lame at best and they even allow people to sort by relevance….. there is no relevance, only cash!